Sermon: Advent 2 Year A – Prepare the way of the Lord 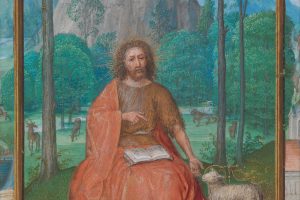 Merciful God, who sent your messengers the prophets to preach repentance and prepare the way for our salvation: Give us grace to heed their warnings and forsake our sins, that we may greet with joy the coming of Jesus Christ our Redeemer; who lives and reigns with you and the Holy Spirit, one God, now and for ever. Amen.

May I speak in the name of the Father, and the Son, and the Holy Spirit

John the Baptist has some hard words for us today. Repentance. Fruitless trees being chopped down and thrown into the fire. It’s not a happy scene, especially in contrast to the harmonious vision of God’s holy mountain that we heard from Isaiah. Isaiah spoke about predators and prey living together peacefully. He spoke about children playing around snakes without harm. And John called his audience a brood of vipers.

I mean, according to the story here, John was really popular, people were flocking out of the city to hear what he had to say and be baptized. So perhaps they weren’t as insulted by being called a brood of vipers as I would be? I don’t know what that was about. Maybe John was speaking in polemics to rile people up and get people to pay attention. A sort of “any press is good press” forerunner? In any case, I do know I’m convicted by John’s words about repentance today.

It might seem awkward to deeply consider repentance in December. The world around us is getting into a holly jolly spirit. Why are we reading about *repentance* now? Why are we reading a passage from Jesus’s baptism and not his birth? Isn’t this month supposed to be about preparing for baby Jesus? Well, yes, Advent is about preparing for Christmas, when God became incarnate in a human baby.

And Advent is also about preparing for the ultimate coming of Jesus at the end of things, when the whole earth will be judged. And that’s what John is shouting about. Repent, because Jesus is coming, and we are going to be judged on the fruit we bear. Repent, because it’s not going to matter who your ancestors were. What matters is the fruit you bear now. What matters is how you are prepared for the coming of the Lord.

There are a lot of layers in that phrase “prepare the way of the Lord.” It’s a verse from Isaiah that we had as our opening sentence. It’s a line in the Song of Zechariah that John the Baptist’s dad proclaims at his birth. It’s used in all four gospels at the introduction of John the Baptist’s role before he baptizes Jesus. I have been fascinated by that one repeated sentence of scripture since at least 2010 when I sent my Greek teacher an email about prepositional phrases. We can talk about grammar and syntax at coffee hour if you want, but the thing that I can’t stop thinking about today is how difficult it is to prepare the way of the Lord and to make the path straight.

I’ve never built a paved road or anything, but I have gone hiking in the wilderness. I hardly ever walk in a perfectly straight line to my destination. I turn to avoid trees, or holes, or sheer cliffs. A straight path is nearly impossible. Even Hwy 99, straight as it is, curves a little bit to follow the contours of the land. Is preparing the way of the Lord as impossible as making a straight path in the wilderness?

Preparing the way of the Lord in my own life has felt pretty meandering, with a bunch of dead ends. When I first struggled with this passage in that Greek class more than a decade ago, I was intending to train as a missionary Bible translator. I put a lot of effort into going down that path. Later I spent 6 years as a graduate student of linguistics, exploring the wilderness of prepositional phrase ambiguity and word order. If that was my preparing the way of the Lord, I think I need to get a new map.

So. Preparing the way of the Lord and making a straight path is easier said than done. What is John’s suggestion? Repent. The repentance that John proclaims sounds harsh, the consequences of unrepentant actions dire: the fruitless tree is cut down and thrown into the fire. I don’t want to be a fruitless tree! I want to bear fruit “worthy of repentance” like John says. But how?

I always roll my eyes a little when preachers appeal to “the original Greek” like it’s some secret to interpreting the Bible, but I’m going to do that anyway. Repentance, metanoia in Greek, has connotations not just of sorrowful penitence, but of changing your mind, of reorientation, of getting going in the right direction again.

When I’m on a long hike in the Sierras, I have a map, some idea of where I want to go, and a compass in case I lose the path. It’s especially easy to lose the path when meandering around obstacles and trees that block the view. If and when I get lost, I can use the compass to reorient myself and get going in the right direction. I might lament the extra steps and time that I was off course, but the important thing is to get going towards my destination again.

It might be impossible for me to make a straight path through the wilderness of life. But as long as I can keep reorienting myself to go in the right direction, I will continue to prepare the way of the Lord in my life.

My “preparing” the way of the Lord hasn’t ended up at the destination I thought it would. I have definitely wandered around in the wilderness trying to make the wrong direction work. I have not made the Lord’s path straight in my life.

But I have reoriented again and again to get going the right way. I fail and get sidetracked (especially about interesting things like prepositional phrases) all the time. And then I repent. I reorient my life towards Jesus. With every repentance, with every reorientation, I prepare the way of the Lord into my life.

John the Baptist yelling at people in the wilderness might seem more than a little jarring, but maybe he was more like the voice of the GPS trying to get you back on track. Repent! Turn around! Get going in the right direction again!