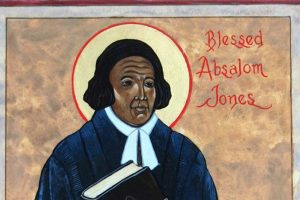 Absalom Jones collect: Set us free, heavenly Father, from every bond of prejudice and fear; that, honoring the steadfast courage of your servant Absalom Jones, we may show forth in our lives the reconciling love and true freedom of the children of God, which you have given us in your Son our Savior Jesus Christ; who lives and reigns with you and the Holy Spirit, one God, now and for ever. Amen.

May the words of my mouth and the meditations of our hearts be acceptable in your sight, O God.

For us today, being gathered together for church is a blessing. We’re in the season after Epiphany now, and so we are celebrating the blessing of Jesus being revealed to the world as we count up the weeks until Lent. And each week, we take this one day, Sunday, to remember the resurrection of Jesus. Every Sunday of the year is a “little easter”, a day to remember and celebrate God’s blessing on us as Christians.

What does it mean when someone is “blessed”? Sometimes we hear that word applied to saintly people. In our church calendar we commemorate these saintly people on 310 days of the year. We don’t have a very strict process for sainthood in the Episcopal Church, and so we end up calling people “blessed” instead of “saint”. Today is the commemoration of Absalom Jones. Blessed Absalom Jones. He was the first Black man ordained a priest in the Episcopal Church. His life was filled with hardship and oppression. And yet he blessed the world with his gifts and service. His story is worth repeating, even if you’ve heard it before.

Absalom Jones was born in 1746 to an enslaved woman in Delaware. His siblings and mother were trafficked away when his enslaver moved to Philadelphia. That man allowed Absalom Jones to learn to read and write and also to marry.

But at this time, a child born to an enslaved woman was born enslaved, so Absalom Jones purchased his wife’s freedom so their children would be born into freedom. But he was not allowed to purchase his own freedom. During the revolutionary war, his enslaver was inspired by ideals of independence and finally freed Absalom Jones in 1784.

Absalom Jones and his friend and fellow minister Richard Allen had been going to St. George’s Methodist Church in Philadelphia. They were allowed to preach and pray in the multiracial congregation, but in 1792 the church segregated the Black members into the balcony in the back. Most of the Black congregation left with Richard Allen and Absalom Jones and formed an ecumenical mutual aid society. They assisted Black people who were recently freed, and they cared for the poor and sick of the city. They were well known for nursing the sick during epidemics that hit the poor especially hard.

Who has God’s blessing? If we look at the life of Absalom Jones, we could see a story that sounds more cursed than blessed. Human trafficking. Oppression. Slavery. Segregation. Working through an epidemic. His parish was denied voice and vote at diocesan convention partly as a condition of remaining Black-led. That does not sound very blessed from a human point of view. But there is so much blessing in this story. Jones and Allen blessed the poor and oppressed of this nation through their steadfast work. The Episcopal Church was the first denomination in the United States to ordain a Black man. St. Thomas’s is still one of the oldest Black-led congregations in the nation. The Episcopal Church started the first schools to educate Black children and teachers. Since the very beginning of the Episcopal Church, we have cared about including everyone in God’s blessing.

For Absalom Jones, it was important to be within such a historically rooted tradition. It was important for him to be included in the blessing of the one holy catholic and apostolic church. It was because of this connection to the larger church, this connection to the universal Body of Christ, that Absalom Jones worked to end oppression and suffering in the world for everyone. He saw that God’s blessing was for him and his people – the poor, the hungry, the weeping, those who were rejected and hated.

Who has God’s blessing? When we talk about blessing sometimes I think we get so caught up in making sure every earthly blessing is lined up we forget to ask: Who has *God’s* blessing? What does *God’s* blessing look like? We act like God’s blessing is going to run out, the way we behave. We act as if our neighbor receiving a blessing means there is less blessing for us. We live as though it is all dependent on us to earn and take that blessing that is freely given by God.

And it is to those who need it the most that we, as Christians, should show the abundance of God’s blessing. In the previous chapter of Luke, Peter went all night without catching a fish. Jesus then blessed him with catching so much fish that his boat started to sink. In our gospel passage today, power flows out of Jesus so much that all who were gathered there were healed. In the next chapter of Luke, Jesus heals the servant of a Roman and raises a widow’s son to life. People were blessed in their moment of need and then some. That’s the thing about blessing. We don’t lose it when we share it. There’s not a limited amount of God’s blessing. God’s blessing won’t run out until all who have need, receive it.

Who needs God’s blessing now? In 21st century America? When someone says “Black Lives Matter” I wonder if they are claiming that same strand of blessing that Absalom Jones claimed. That same strand of blessing that Jesus proclaimed in the blessings in the gospel according to Luke. That blessing from God that names specifically those who need to be blessed. It is important to say that Black Lives Matter today in the same way that it was important for the poor and hungry to be blessed by Jesus. Being hungry or poor is seen as a curse, not a blessing, by society. It is important to proclaim that Black Lives Matter because so often our society treats being Black as a curse.

Absalom Jones was exiled from his Methodist church because he wanted full inclusion of Black people in the church. Even when he was finally ordained a priest in the Episcopal Church, his parish was excluded from having a formal voice because they insisted on Black leadership of their congregation. I’m not going to go through a litany of statistics and stories of how Black people have been systematically excluded and violently oppressed in this country. That information fills shelves of books and can’t fit into a 12 minute sermon. We might have had a Black president. We might have a Black presiding bishop in the Episcopal Church. But Black people are still incarcerated and killed at higher rates than white people. Black people are still systemically poorer than white people in this country. It can seem like a curse when you are excluded and hated and weeping. But, who has God’s blessing? Exactly those who are excluded and hated and poor and weeping.

We do not have to be afraid that we will lose blessing by sharing it. It is through sharing the blessing that we have received, that we bless the poor and the hungry and the weeping. Welcoming those who are oppressed into the blessing of God doesn’t mean there’s less for us – it means there is that much more blessing for everyone.

When the Episcopal Church welcomed Absalom Jones and his Black congregation into membership, they were welcoming a whole congregation of the faithful into the blessing of the one holy catholic and apostolic church. We belong to a church that has welcomed everyone into God’s blessing from its very beginning. That legacy is such a blessing.