Sermon: The first of his signs (Epiphany 2 Year C) 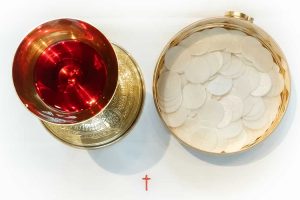 Collect: Almighty God, whose Son our Savior Jesus Christ is the light of the world: Grant that your people, illumined by your Word and Sacraments, may shine with the radiance of Christ’s glory, that he may be known, worshipped, and obeyed to the ends of the earth; through Jesus Christ our Lord, who with you and the Holy Spirit lives and reigns, one God, now and for ever. Amen.

Many of you probably know that before I went to seminary I was in graduate school studying linguistics. I did not learn how to speak a bunch of languages, mostly I did a lot of data analysis. Some linguists learn multiple languages, some linguists study the history of one language, some linguists study one little detail of grammar or pronunciation for their entire careers. One thing that all linguists study, and this is going to sound so broad that it’s almost meaningless: one thing that linguists are all trying to do is figure out how languages mean things. A lot of things have to happen for me to make some specific…sounds and for you to understand some specific thoughts.

Today I want to look at one small piece of this process of communication. We all know that different languages use different sounds to say different words. Again, it sounds like I’m saying something so obvious that it’s meaningless. In English we call today “sunday”. In Spanish today is “domingo”. Completely different sounds, completely different words, but referring to the same thing. It goes the other way too. I remember this one summer my grandpa went on a quest looking for “tuna ice cream”. I thought he was going crazy. Ice cream with fish?? But then he explained that tuna is the Spanish word for the prickly pear cactus, and actually is a delicious ice cream flavor. The words we use refer to real things, but we can only understand the words if we know that connection between word and meaning.

In linguistics, we use the concept of a “sign” to describe this idea of the relationship between words and meanings. A “sign” has a signifier – for example the word tuna, and a “signified”, either a fish or a cactus, depending on who’s saying and hearing it. So, when someone says something, when someone uses a linguistic “sign”, there’s the meaning they have in mind, the actual series of sounds or letters they make, and the people involved in the conversation.

So. What does this have to do with Jesus? In John’s gospel, the author uses a funny little phrase in the first half of the book. Jesus’s miracles are not called miracles, but “signs”. This story we heard today of Jesus turning water into wine at a wedding reception, is “the first of his signs.” What does this “first sign” in John’s gospel mean? So, the signifier is the miracle of water to wine. What does it signify?

I can imagine a misunderstanding occurring at this point. If we’re not speaking the same language, we might end up thinking Jesus turning water into wine means something as ridiculous and untrue as fish-flavored ice cream. This is a danger of interpreting signs from a language and culture and context that we do not share. It’s possible that turning water into gallons and gallons of wine is Jesus giving us license to party. People had finished off all the wine they had bought for the wedding already, and Jesus provides more. What a party! I don’t think Jesus is condemning partying or anything, but I’m not sure an abundance of alcohol is the entire meaning of this first of Jesus’s signs. The joy of a successful party might have some truth in it though. Jesus feeds thousands of people in an upcoming chapter of this gospel, another of his “signs”. A community coming together to be fed, to have a joyful time, seems to be a priority for Jesus.

In commentaries and historical interpretations of this passage, you’ll hear a lot about the culture of hospitality that would have been present during this story. It’s more than an embarrassment to run out of wine. It’s an indictment of the host’s hospitality and ability to provide for guests. Was Jesus helping the host save face at the wedding? Maybe. An interesting line in this story is that the steward who tasted the wine didn’t know where it had come from, but the servants who got the water knew. Maybe Jesus was making sure that the people who mattered to society thought well of the bridegroom’s hospitality. I don’t know. That doesn’t necessarily fit with how Jesus treats servants or the wealthy in other stories. Jesus is not necessarily concerned with looking good in front of the chief stewards of the world. But maybe this story does have something to do with hospitality. Hospitality culture is one of the contexts that might shed light on the meaning of this sign, just like knowing my grandpa was using a Spanish word would have been good to know as I interpreted his ice cream choices.

But seriously, what does the sign of water into wine mean? At the beginning of this passage we get a strange interaction between Jesus and his mother. She’s not named in this story, or in fact in the entire gospel of John. But Mary, the mother of Jesus, shows up at several points in John’s gospel. If we skip ahead to the crucifixion, Jesus has another conversation between his mother and disciples. In that conversation, Jesus, already hanging on the cross, tells Mary that “the disciple who Jesus loved” is her son, and tells that disciple that she is now his mother. The next line tells us that Jesus knew that all was now finished. This is in contrast to the story we heard today. In today’s gospel, Mary asks Jesus to solve this physical problem of lack of wine, this cultural problem of failed hospitality. Jesus tells his mother “my hour has not yet come.”

Jesus hour had definitely come at the time of his crucifixion, all was now finished. At that point he hands responsibility between his mother and himself to his beloved disciple. Those physical needs, those needs of hospitality, they are handed off to the disciple. This is a call for each of us as we hear Mary asking Jesus to do something. By the time Jesus’s hour had actually come, by the time all was finished, it was the disciples’ responsibility to do this work. I think of the ways that we are called to join together in joyful, hospitable community. …..I think of the ways that those communities are broken. By literal hunger and thirst in our own neighborhoods. By threats that make communities afraid to gather. Antisemitic violence like the hostage situation at Congregation Beth Israel in Texas. Mary told Jesus “they have no wine”. She didn’t tell Jesus how to fix the gathering. She just trusted that he would. And now after the crucifixion, after all has been finished, now it’s Jesus’s disciples responsibility. Now it’s our responsibility. I do not have the power to turn water into wine without the use of grapevines, but I am called to bring joy and hospitality to my communities.

But still I think the sign of turning water into wine means more than all that I’ve said already. This is the interesting thing about signs. We can have one interpretation considering one context, but then we look from a different angle and there’s a whole lot more meaning there. The gospel author gives us another look into the meaning of this sign: “and he revealed his glory.” According to this, the first sign of Jesus revealed his glory. But if the chief steward didn’t know where the wine had come from…then who was Jesus’s glory revealed to? Well, those servants who carried the water, for one. Jesus’s disciples were also invited to this wedding. And the gospel author tells us that they believed in Jesus after this first sign. What is the glory of Jesus that was revealed? What does this sign signify?

A lot can go wrong in communication even when people are supposed to be speaking the same language. Things can get a lot more dicey than just a bad ice cream flavor. Linguistic signs can be misinterpreted. Especially ones that have multiple meanings. It helps to look at who the person is who’s making the sign. It helps to look at the context of the sign. But even then, we still might not get the full meaning. Even if I know tuna refers to a prickly pear, I still won’t know how good of an ice cream flavor it is until I taste it. I still won’t know the full meaning of the sign until I experience it. Which is why God sent Jesus as the Word, to be here, with us. God didn’t have to rely on the imperfections of human language. God didn’t have to rely on signs pointing to the glory of Jesus. God’s glory could be experienced directly through Jesus. “And the Word became flesh and lived among us, and we have seen his glory” (John 1:14) This miracle at the wedding at Cana was the first of Jesus’s signs. Human linguistic signs can communicate an extraordinary amount in single words. But God’s glory is so far beyond that. The Word of God, the Word made flesh, Jesus, communicates God’s glory to us. It’s no accident that the words communion and communication share a common origin. When we communicate with God, through signs, through the Word, through Jesus, we are brought into communion. When we share in communion, whether that’s the community coffee hour or the holy communion of the eucharist, God’s glory is communicated. That’s what the sign of the wedding at Cana means: God’s glory is revealed, is communicated, through Jesus, the Word made flesh.