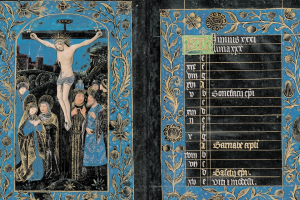 The hour has come for the Son of Man to be glorified.

Next week we’ll commemorate Jesus’s triumphal entry into the city, with palms and shouting crowds. This week we’re looking at Jesus’s last public sermon. There are several more theological discourses to come, but those were with the disciples only. In this passage we see Jesus as he accepts the end, the culmination of his public ministry. Jesus knew he was going to be killed in Jerusalem, and now he publicly accepts that in this one last speech to the crowds who had gathered in Jerusalem for the Passover festival. Jesus was trying one last time to explain himself. Explain the purpose of his life and ministry. Answer that question that I’ve asked professors and priests: Why did Jesus have to die?

In the passages surrounding the one we read today, we get some idea of why the Jerusalem authorities wanted Jesus gone. Jerusalem was a city occupied by the Roman Empire. Israel had been conquered and occupied over and over, this was just the most recent overlord. You don’t have to look very far away from today’s reading to see how tense and on edge the situation was. Jesus’s life was marked from the very beginning by the government asserting its own form of order, upending his parents’ lives as they left home first for a census and then fleeing a massacre. Just the rumor that a new king was going to challenge old Herod caused a massacre. If anyone looked to be a threat to the order imposed by Rome and her deputies, they were killed. This period of Israel’s history is marked by zealous rebels asserting their freedom as God’s people…and their rebellions being brutally stamped out by the Roman authorities.  Jesus’s own cousin John was imprisoned and killed because the government-appointed authorities felt threatened. Eventually, Jesus’s life is traded for that of one such political prisoner, Barabbas. Barabbas is described in the gospels as involved in insurrections against the Roman occupation, and for that was sentenced to death. A couple decades later, there is a violent rebellion in Jerusalem that ends only after the entire temple is destroyed. It was a volatile political situation for all the Jewish people living under Roman rule. Jesus had to be careful not to attract the wrong kind of attention or he would have been killed before his time. He spoke openly of the kingdom of God. Such talk was seen as insurrection, as rebellion, against the divine right of Roman rule. Why did Jesus have to die? Jesus died because the Roman Empire saw Jesus as a threat.

The entire country, or so it seemed, was gathering in the capital city. Everyone was coming to town for the Passover festival. This was a temple-centered event, with ceremony and sacrifices. There were crowds, dead sheep, and everywhere Roman soldiers watching everything for signs of rebellion. The temple authorities knew that their entire way of life could end in violent suppression if the Roman empire decided they were too much trouble. All  the traditions that they had so carefully preserved through exile and previous occupations could come to an end if they couldn’t keep the crowds under control. All these people….they just needed a little nudge in the wrong direction and the Roman swords would come slashing down. Any sense of Israel would be crushed. These temple authorities saw how easily the crowds got riled up. The temple authorities saw how fervent the followers of Jesus were. In the passage we read today we see that it wasn’t even only Jewish people who were interested. There were some Greeks who wanted to speak with Jesus who has become so famous, it seems, that his disciples must act as crowd control. Jesus used to be able to let little children climb all over him as he taught. Now he needs handlers because even foreign visitors to Jerusalem want time with him. It would be too easy, the temple authorities thought, for Jesus to set off a riot in this crowd that led to the destruction of Israel. Better for the one man to be killed than the entire nation be destroyed. They probably knew the futility of trying to appease the Roman empire, but they also were trying to keep the peace long enough that the traditions of Israel entrusted to them would survive. Why did Jesus have to die? Jesus died because the temple authorities were afraid Israel would be destroyed.

Jesus had to die because of the volatile times he lived in, but that is not why Jesus predicts and accepts his death in our reading today. In the Gospel According to John, Jesus seems very concerns to be doing things at their proper time. When his mother asks him to start performing public miracles at the Cana wedding feast, he is reluctant because the time doesn’t feel right. And just a chapter before today’s reading, Jesus and his disciples discuss the risks of going to Jerusalem because of the tense political situation. But in this last public speech of his, Jesus declares that the time has come: the hour has come for the Son of Man to be glorified. Why did Jesus have to die? Jesus had to die because the time had come.

What did Jesus mean when he said that the hour had come for the Son of Man to be glorified? Was he looking to go out in a blaze of glorious violent rebellion, as the temple authorities feared? I don’t think so. I can imagine that Jesus, the country carpenter, would be overwhelmed by the crowds clamoring around him. In episode after episode, we see Jesus retreating from crowds, even walking across the sea of Galilee to head them off. There’s so much going on. Jesus’s political situation was so precarious, despite his desire to escape notice. Not only were his fellow Jewish citizens on edge, he was also drawing the attention of some Gentiles. There were Greek-speakers who were sympathetic to the Jewish religion. God-fearers they were called. Perhaps these “Greeks” were in Jerusalem to take part in the Passover festival and noticed this young rabbi drawing crowds. Were they interested in hearing Jesus’s message? Is this the first indication that Jesus’s gospel would spread throughout the world? Is that what prompts Jesus’s last sermon? Jesus’s desire to preach to a wider audience, before it’s too late?

I think that Jesus could no longer avoid what he knew must happen. He was in Jerusalem, the epicenter of all the tension. The moment of his glorification was at hand. Jesus’s soul is troubled. The moment he fears has come. Was it going to be the violent rebellion the Romans feared? Or the destruction of the Jewish way of life that the temple authorities feared? Jesus turns all this fear on its head. “Those who love their life lose it.” The Romans, the temple authorities, they all loved their way of life, they wanted to preserve it at all costs. But in doing so they created so much tension and turmoil that all was lost anyway. “Those who hate their life in this world will keep it for eternal life.” This doesn’t sound like the war cry of a revolutionary. This sounds like the cry of desperation, trying to make inevitable death bearable. Inevitable death. Necessary death? Jesus uses a farming analogy, as he so often does. When wheat is planted, the single grain must die so that the abundance of wheat can grow. The “death” of the seed that is planted brings an abundance of life. When Jesus says “those who hate their life in this world” he is talking about rejecting the limited, oppressed life that the people in Jerusalem, Jews, Greeks, Romans, appear to be clinging onto. That life, that seed of God-given potential, can do very little if you hang onto it like an unplanted seed. It is by giving up your life to God, serving God, that life is planted so as to grow into abundant and eternal life. Why did Jesus have to die? Jesus had to die to bring eternal life to the world.

Jesus continues driving the point home: “do I ask my Father to spare me from death?” he asks “no, it is for this that am I here.” For what is Jesus here? To die, accused as an insurgent? No. For the glorification of God’s name. God thunders from heaven at this point. “I have glorified my name, and I will glorify it again.” Some people think it’s just thunder, but others begin to get the point. Jesus has to die so that God’s glory is made available. Jesus has to die so that the glory of eternal, resurrected life can come into the world. God’s name has been glorified this whole time. Through Moses, through the prophets, through the work and preaching of Jesus. And God will be glorified again. Through the lifting up of Jesus. Jesus is lifted up in order to be executed, and Jesus is also lifted up in resurrection. When Jesus is lifted up, he draws the entire world together, in glorifying God and in the promise of eternal life. All the political tensions and worldly concerns die with Jesus. The hour that has come, the hour that Jesus has come to, is the death of this small, tiny life. And the resurrection that is coming, the glorification of the Son of Man, will be the fruit of eternal life. The wheat seeds must be planted and die in order for the crop to grow to be harvested. Why did Jesus have to die? Jesus had to die, to “be lifted up”, as he puts it, so that the all people would be drawn to him in an abundance of life.